I Got A Mothers Day Card From Tony Abbott And It Read ‘Screw You, Stay-At-Home Parasite Lady!’ 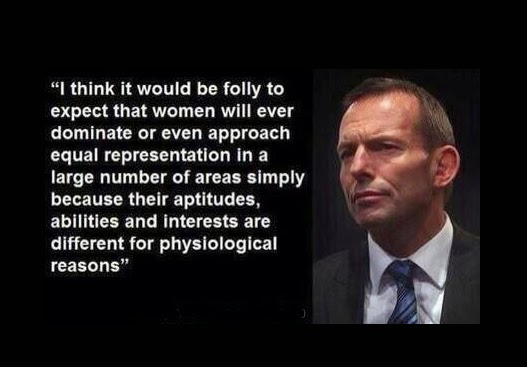 Mothers Day was lovely around here. My eight year old Peanut made me a coffee for the first time, and wrote me four poems - each of which was funnier than the last. We all went and watched 6 year old T-Bone play rugby in the sunshine, had  a lamb roast at Mum’s place, and then we finished a game of Monopoly. I had two baths, ate Turkish Delight and watched Masterchef with my feet on the heater. It was, all round, a beautiful day.

Late in the evening, though, I went online and saw that the Abbott Government had announced their new child-care package. How delighted I was to read that they are funding a new bonus to some parents, not with the billions saved by their scrapped Parental Leave scheme (as they promised) but by removing childcare tax breaks to single-income families with a ‘family income’ over $65, 000 a year.

Also, they made sure to apply, repeatedly, the shamefully  accusatory term ‘double-dipping’ to those women accessing their legal right to governmental  maternity leave entitlements as well as their corporate entitlements.

Charmingly, this announcement was made on Mothers Day.

The choice that our family has made to have one parent at home while the children are small has cost us in some economic ways and that’s fine. We feel that we’ve gained much from it and  it’s right for us. We pay taxes. We work hard to try and raise well-rounded, community-minded, healthy children that will be an asset, not a drain to the future.

I really love being a stay-at-home mum. It’s not the sum total of my ambition but it’s where I want to send my energies in these early years while my children are so small. I’m lucky to be able to make this choice but it’s a sacrifice too, with economic and career ramifications.

I work part time but it seems that my only use to this Government is when I make a greater economic contribution. The on;y worthwhile family unit, to this government, is the double-income earning version. The time I spend raising and nurturing my children is of no value. I am in fact, some sort of a social parasite.

Thanks for making it clear that you have no respect for me, vast cock-forest of the Australian Government. Rest assured that the feeling is mutual.

ps - Tony’s got it in for climate change this week too. ‘Maurice Newman, the chairman of the Prime Minister’s business advisory council, has written in The Australian that scientific modelling showing the link between humans and climate change is wrong and the real agenda is a world takeover for the UN.’ (source). This is his PRIMARY business advisor! (facepalm)

I hope you all had a lovely Mothers Day out there. Just FYI, I have respect and admiration for the many different ways that women manage work, home life and raising children. I know so many remarkable women who work hard and contribute enormously to the communities that they live in, whether they are paid outside the home or not.

The Empty Thrill Of Snark »